It’s about time began almost by joke. Old clockworks in a fleemarket in Lisbon, I bought them because they were fascinating without knowing what to do. After a while sitting in my studio these clockworks began to come to life slowly first and then faster and faster, me searching for and buying clockworks everywhere. The climax was a fleemarket in New York – but as every climax it got me also to the end.
The resulting jewellery work was finished by 2005 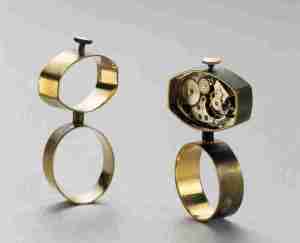 With Urdumm I stopped, you cannot go on forever, and time was over.