The idea of ​​Bella per Forza 30×60 was born in Zagarise, in 2016, on the occasion of the second edition of the Giardini delle Esperidi Festival, an event that combines the revitalisation of the Southern Italian mountains and its villages with the value attributed to culture and perspectives in art (poetry, literature, music, figurative, performative arts) as tools to comprehend the intrinsic reality of the area and its cultural identity.

The basic idea of ​​Bella per Forza, involves the use of “elementary” materials – the cotton fabric of Prato (Tuscany), the potato of the Sila area (Calabria), two iconic products of the respective realities. The materials immediately bring to mind, an exchange between different communities, locations and people who want to dialogue and who as they have already done symbolically, will constitute the stages of departure and arrival of the imagined path of Bella per Forza.

In detail, Bella per Forza – as a physical “object” of participated art, installation and performance – has developed around the following idea:

1) decorate single cotton patches of the size of 30 * 60 cm, in different occasions, by different people in complete freedom, using cut and engraved potatoes as stamps (a technique often used in creativity courses for children)

2) sew the decorated patches together by hand to obtain a bigger and bigger cloth;

3) “unroll” the cloth in particular occasions (with always different performative acts), the locations of the “unrolling” will be chosen and carried out by the members of the communities that have contributed to the decoration of the single patches;

4) use the cloth as an element which, through its symbolic and visual force, colours and temporarily transforms the space and its surroundings.

Therefore, a canvas-collage by definition in progress, which establishes connections, transforms and is continuously  transformed.

Colours, drawings, motifs each with a strong “individual” specificity and which, added to each other, create a new formal and aesthetic entity, which changes scale and meaning.  A union that “produces” beauty and where each single contribution is at the same time irreplaceable (no one is the same as the other) and interchangeable. There are no leaders because all are leaders.

The work, as a practice of participatory art, aims to obtain that different communities, more or less stable (whole localities in particular events but also the guests of a retirement home for the elderly or groups of students), acquire awareness about the beauty that arises from collective work, where everyone is contributing in a process, in respect of just some very simple rules (size of the canvas, choice of colours, sewing mode).

The operation, along a path started in Calabria last July, showed how collective doing and the sense of communion brought about by a shared manual work with the essential seriousness in children’s games concretize what is often considered only a utopia: produce beauty through a work done together without competition.

As expected, among other things, the collective work has become an object that, beyond the documentary path that is being realized, remains and can be used easily, in different ways and in different places, each time acquiring new form and new sense .

As an example: in Zagarise it has become a carpet spread on the steps of the splendid medieval Cathedral of the town, on which a theatrical performance took place, in Salerno it was the tapestry-showcase of the National Conference of clown-doctors held in the Hospital Civile della città, in Cannistrà (province of Messina), has colored the streets of the village where a project of urban regeneration is taking place.

The objectives that we believe have already been achieved (and which will be further extended) through “Bella per forza 30×60” have been:

-stimulate a choral and manual work that involved and put in dialogue people and collectives, “sets with variable composition”, even geographically distant;

-receiving / recalling the traditions of belonging (the use of fabrics, sewing, etc.) representing and ritualizing them in a simple and collective work;

– make visible the need for a link between people and between them and the urban scenarios, places, houses, that is all that constitutes the identity of each community, declining it not only to the past but also to the present and the future, as an ever-changing entity.

Ultimately a work that, in a time that has largely lost the sense of being together and solidarity (internal, as well as the other), indicates the usefulness of new paths, strategies aimed at recovering the profound reasons for living social, through the recognition (of beauty) of diversity.

The “transit” of Bella per Forza in a place is basically organized,in three phases:

1) small, individual and  “itinerant” workshops at schools, associations, or within festivals and cultural events, where  all the materials necessary for the realization of single panels (precisely the size of 30 * 60 cm) are provided.  Each participant will decorate the panels in total creative freedom, using the potato as stamp.

2) assembly of the panels, into one drape, performance of sewing

3) “Exposure”, opening of the drape and its use to highlight / reread significant locations 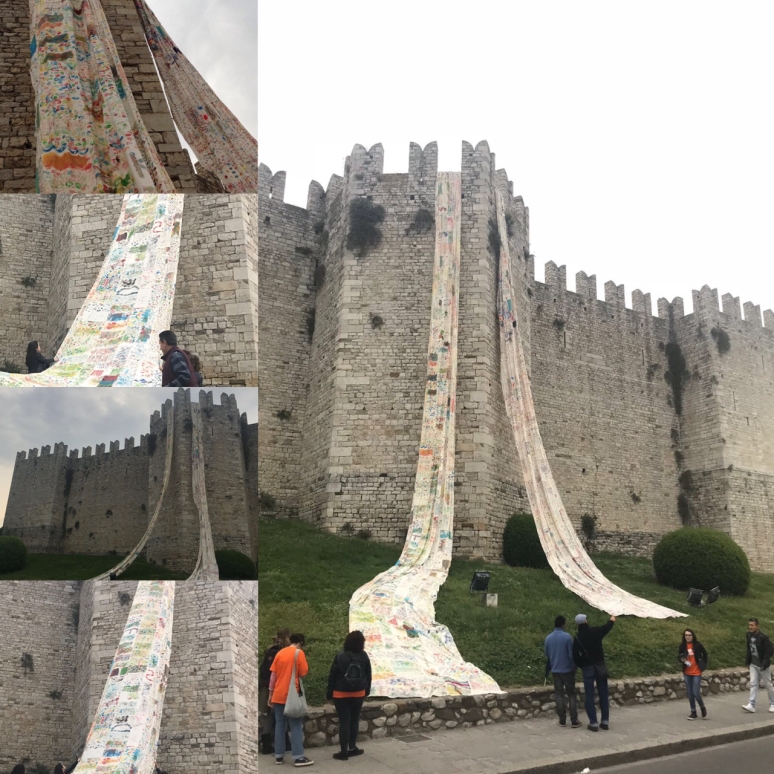 Bella per Forza is now more than 50m long and about 5m wide and more than 600 people of all ages have contributed to its creation.